Explaining History’s reporter at large, Michael O’Sullivan write from China, where he is currently based, on the precepts of Confucian thought. 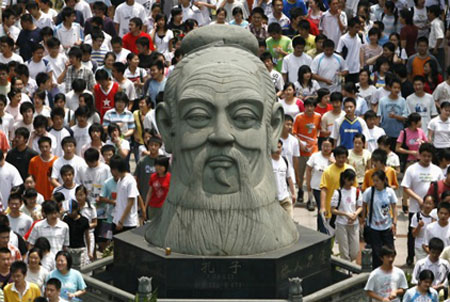 A figure deeply associated with China in popular consciousness, there is no denying the influence that Confucius has had on China. From the Second century BCE until 1911, the body of this teachings Confucianism was the official orthodoxy of Imperial China and had a deep impact on Chinese Society and societies throughout Asia. Over the millennia this ideology was constantly changing with other thinkers contributing to the core Confucian beliefs of: “man is morally perfectible, that learning is the key to moral improvement, that sages (wise men of the past and the study of history) of antiquity provide a way to be moral and behave appropriately in society, that the morally superior man can have a transforming effect on others, and that social harmony is the result of people fulfilling the moral responsibilities of their roles”. The purpose of this article is a very brief overview of Confucianism, I have either the expertise (Having not even read the entirely of the Analects of Confucius) however given its importance to the history of Asia, it merits a discussion.

As mentioned above, man and society is central to the thought of Confucius. Living through a period of civil war and disunity in China, the Master sought to encourage practices that promoted a peaceful society. These practices include good government, proper social relations and a respect empathy for all peoples bound within ritual practice. Ritual practice or Li are behaviours that actualise the practices of a peaceful society, this includes rules such as manners for eating, the appropriate practice for grief and remembering dead ancestors, how marriages are to be conducted, styles of clothes to wear etc. By practicing these rituals sincerely and with the appropriate emotion man cultivates and expresses his innate goodness, which in turn transforms him into a righteous man and ensures the perfect functioning of society.
It cannot be denied that the idea Confucian society is very hierarchical. The role of Li as mentioned above is to condition people to fulfil the rights and responsibilities of their assigned roles of: ruler and subject, father and son, husband and wife, elder brother and younger brother, friend and friend.” Upon the proper functioning of this system and its components is social harmony achieved, as illustrated in the example of the ruler. The ruler who rules through his mastery of virtue and Li, ensures the wellbeing of his subjects and teach them proper ritual behaviour, thus ensuring the functioning of the other roles.
It must be realised that for Confucius and his followers that this hierarchical view also had a religious dimension. While there is much argument over whether Confucianism is more focused on humans and philosophy then religious with fascinating arguments being put forward such as Confucius using the framework and language of traditional Chinese religions to express his philosophical views and allow people to understand and access them., it is my opinion that Confucianism is a religion.
Although there is no creator or master deity in Confucianism, for the Master and his followers; the notion of two realms, the physical human world and heaven existing in a state of “organic interconnectedness between the realms and all beings occupying them is a central idea. Only when humanity practices Li and proper ritual behaviour those this natural balance occur. Linked into this idea is concepts of a spirit world occupied by nature spirits and ancestors (to be worshipped) who can influence the material world. This metaphysical aspect of Confucianism was developed by the Neo-Confucian thinkers such as Zhu Xi. According to Zhu Xi, the aforementioned interconnectedness and moral perfectibility is made possible by Qi, a cosmic energy of which all things are made.Moreover, morality occurs as humans are allotted different quantities and qualities of Qi, despite this however, man through ritual practice may rarefy and purify his Qi thus achieving the Confucian goal of personal and thus societal, thus cosmological harmony.
However, it is an important question to ask if Confucianism is a philosophy or a religion. It is perhaps best to borrow an example used by a researcher of Buddhism who suggested that the study of religions is like the three blind men describing an elephant. Each accurately describes a part of the topic but not the whole. When considering the question of whether Confucianism is a religion or not, Ninian Smart’s seven dimensions of religion is an excellent model to frame the question. According to Smart a religion contains these seven aspects: practical and ritual, experimental and emotional, narrative and mythic, doctrinal and philosophical, ethical and legal, social and institutional and material. As discussed above ritual, practice, doctrinal, ethics and experimental (in the form of Neo-Confucianism) are all present in the ideology, the ultimate goal of which was to create a genuine emotional condition in the practitioner.

With the acceptance of Confucianism by the First Han Emperor as the basis for Chinese and governance with the Imperial exam system codified the legal aspect of the ideology. Where the analysis may fall apart is the Narrative and mythic aspects of religion. It could be argued that Confucius’s lifelong interest and revival of practices related to the idealised society of the early Zhou period (1045?-221 BCE). Given that much of the practice of Confucianism is revived from idealised stories and examples of the “Golden age” of the Zhou, it could be debated that these stories fulfil the role normally reserve red for the mythical and epic in other religions which is a debate worth having.

Confucianism is a diverse body of ideas which shaped Chinese and South-East Asian countries for thousands of years until the present day. Given the richness of its though and its shaping of societies to this day, it is a topic worthy of the many investigations into it.